Who is Anthony J. Stastny?

Anthony J. Stastny has been coaching and motivating business owners for the last 10+ years. As a Business Coach, he works with hungry business owners that want to achieve greater success.

Tony is a Regional Director of Business Network Intl (BNI). He does group trainings in the areas of “How To Invite & Grow Your Chapter,” and, “Referral Workshop” – a program that teaches members how to give & receive more business. He also works with individual members. Helping them identify, approach, & work with their referral partners.

Tony is the founder of The Next Level Workshop – a networking / coaching group that brings business owners together to promote themselves and make new connection. TNLW’s monthly events features a different speaker & a topic that provides valuable information to the attendees. The Next Level Workshop is approaching six years old.

Tony is skillfully recognized for his ability of bringing people together to create a sense of community. His highly energetic and enthusiastic motivational style assures he effectively teaches business owners how to grow their network, reach beyond their comfort, stay focused on goals, & achieve greatness!

Anthony Stastny, also known as “The Connector,” has been instrumental in establishing more than two dozen chapters of BNI in the northeastern & eastern OH region, which has generated hundreds of millions of dollars in referrals for his local members. In 2013, Tony earned the BNI Director Of The Year award for the state of Ohio.

Additionally, for over 13 years, Tony mastered his sales and marketing skills in a direct selling air purification company whereby he received recognition for top 10 in company leadership and top 10 in sales and recruitment. Tony has thrived in numerous sales environments including trade shows and radio advertising. His success has resulted in earning a luxury bonus car, several presidents’ club awards, and paid vacations.

Tony’s passion is transforming the lives of the people he touches.

In the summer of 2014, he began to study the psychology of habits and how they’re formed. At that same time he deactivated his personal Facebook account for 1 ½ years, and gave away every television in his home to focus on his own life transformation. 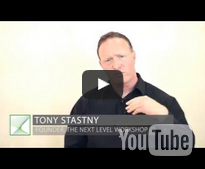